The Royal Photographic Society awarded Jean-Jacques Naudet, publisher and editor-in-chief of L'Oeil de la Photography, aka The Eye of Photography, the Hood Metal for his achievements in the art and science of photography. 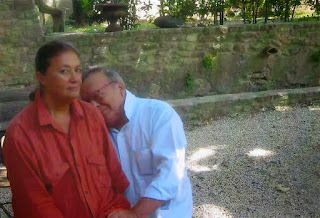 Jean-Jacques Naudet, above with wife Shiva, was awarded the Royal Photographic Society's Hood Medal. Past recipients of the Hood Metal include Lord Snowdon, Richard Attenborough and Jacques Cousteau among many others since 1933.

The Royal Photographic Society awarded Jean-Jacques Naudet, publisher and editor-in-chief of L'Oeil de la Photography, aka The Eye of Photography, the Hood Metal. The Royal Photographic Society was founded in 1853, to promote the art and science of photography, a mission it continues to this day. RPS has announced the recipients of its annual Awards at a ceremony held at the Royal Society, in London. The Awards have been given since 1878,and recognizes achievements in the art and science of photography.

"It came in the post one morning. The Royal Photographic Society has awarded you a medal for your outstanding contribution to the advancement of photography! I was absolutely over-the-moon - it was like Christmas, right in the middle of summer! I was even more delighted when I saw that the other winners included Maria Morris Hambourg, the legendary Founding Curator of the Met’s department of photographs, Wolfang Tillmans, Bryan Adams and Nadav Kander. The news came after a tough spring and summer spent waiting to get the new version of the website online. The award is not only for me but for the whole team of L’Oeil de la Photographie, headed by Ericka Weidmann. It’s been quite an adventure and after various different formats, we are now on the brink of success, thanks to our contributors and the backing of some wonderful supporters, especially Maja Hofmann.  Unfortunately I wasn’t able to attend the awards ceremony as a fortnight after the news came through, my eldest son Gédéon announced that he would be getting married in Tuscany on the same date!.”  – Jean-Jacques Naudet

An Interview with Jean-Jacques Naudet

Elizabeth Avedon: How did you first become involved in photography?

Jean-Jacques Naudet: Totally by pure coincidence. When I was a young journalist I started working at Vogue on movie reviews. It was very very badly paid. One day Shiva announced she was pregnant. We wanted to stop being extremely poor. Vogue was great because although I was not very well paid, we were invited everywhere, from cocktails to receptions, all kinds of social events. But it was not possible to bring a small baby to openings and cocktails, so I had to decide to work in another magazine and by pure coincidence I was at French PHOTO.

I didn’t know anything about photography when I started. I discovered photography and photography became a passion. Roger Thérond - who was, who is my mentor, and was the Director of Match, the Director of PHOTO, in fact he was the Director of the Hachette Filipacchi Publishing Company; for the second piece I had to write for PHOTO, Roger sent me to go and meet Romeo Martinez and make an issue about the History of Photography. So I went to see Romeo. I was really really impressed and Romeo gave me all the information I wanted and then he said, “What do you know about Atget?” I said, ”Atget. Great photographer, loved by the Surrealists and the one who made us remember the old Paris.”

Hooray for Jean-Jacques, so dedicated to photography, such a lovely person!

Well deserved. I had the pleasure to meet him at the opening of my show in Arles last year. A wise, funny, sweet man and a living encyclopedia of photography. He's an absolute reference. Champagne!!

Lovely shot. Says it all.