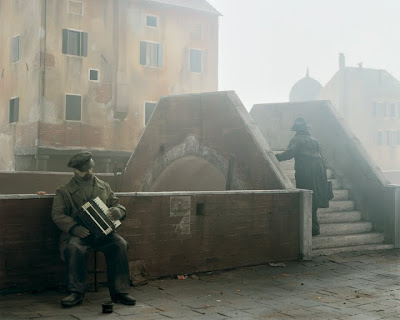 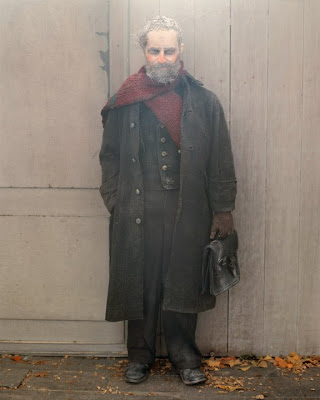 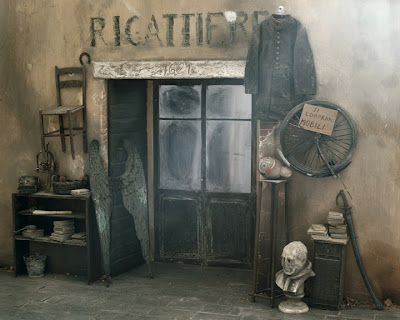 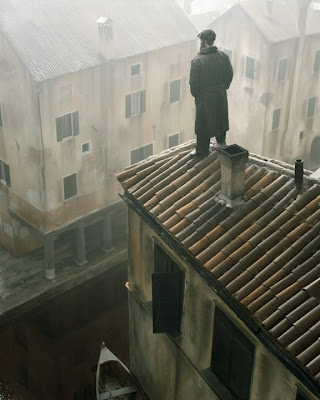 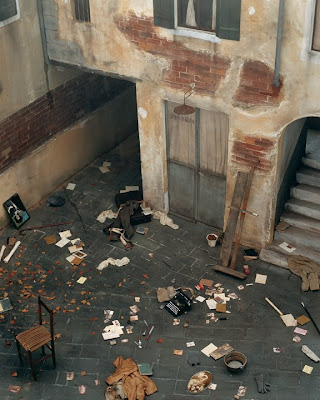 
"The Automaton of Venice is a photographic narrative from beginning to end. It was created based on a story Photographer Paolo Ventura was told as a child. The fictional story centers around an elderly, Jewish watchmaker living in the ghetto of Venice in 1943, one of the darkest periods of the occupation of the Nazis and the rule of the fascist regime in Italy. The city where the watchmaker has lived his entire life, now desolate and fearful, is the stage where this story unfolds. The old man decides to build an automaton (an anthropomorphic robot), to keep him company while he awaits the arrival of the fascist police who will deport the last of the remaining Jews in the ghetto."

"Ventura’s creative process for The Automaton of Venice was first to write the story as he wanted to tell it through the photographs, then build elaborate models in his studio out of sets and miniature figurines. The final works are the photographs of the scenes created within the models. "

"Paolo Ventura’s work is currently on display in the Italian national pavilion at the Arsenale at the Venice Biennale and in the exhibition Otherworldly: Optical Delusions and Small Realities at the Museum of Art and Design. His works have been acquired by prominent public collections including the Museum of Fine Arts in Boston, the Library of Congress in Washington D.C. and the Martin Margulies Collection in Miami, Florida. Two monographs of Paolo Ventura’s work have been published: War Souvenir (Contrasto, 2006) and Winter Stories (Aperture and Contrasto, 2009). He is also included in the new publication Photographic Memory: The Album in the Age of Photography (Aperture/ Library of Congress, 2011)." – Hasted/Kraeutler

the work is romantic and beautiful, Ilike this.