She Disappeared into Silence, 2017
Mona Kuhn

"For this billboard exhibition, my intention is to expose privacy and intimacy on a collective and public scale. My hope is to transport the audience away from the collective and into the private, and vice versa.” – Mona Kuhn

Mona Kuhn is a highly acclaimed artist and longtime Californian, attending the San Francisco Institute of the Arts before moving to Los Angeles, where she has resided for over 10 years. Known for her large-scale dreamlike images of the human form, her work often references classical themes, though recent works have begun explorations with abstraction. For this exhibition, she has contributed a collage from her upcoming series and book She Disappeared into Silence with text by curator Salvador Nadales, Museo Reina Sofia, to be published Spring/Summer 2017 by Steidl. 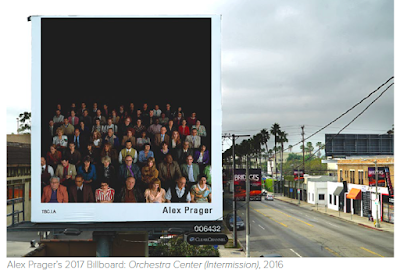 “I chose this work for the billboard because it juxtaposes the audience and viewer, provoking the questions who is the performer and who is the audience? Where does reality end and artifice begin?”– Alex Prager

Alex Prager is a Los Angeles-based artist whose elaborately staged scenes tap into a shared cultural memory. She frequently references Hollywood cinema in her photography and film, using it as a tool for manipulating realities. “The construction of the images is intentionally loaded” says MoMA curator Roxana Marcoci. “It reminds me of silent movies – there is something pregnant, about to happen, a mix of desire and angst.” The work shown, Orchestra Center (Intermission), 2016, was recently presented at a solo exhibition of her work entitled La Grande Sortie at Lehmann Maupin Gallery, New York.

Jennifer Steinkamp is an installation artist who works with video and new media in order to explore ideas about architectural space, motion, and perception. She completed her BFA, MFA and an honorary PhD from Art Center College of Design, Pasadena, California, and is currently a professor at University of California Los Angeles. Jennifer’s work has been internationally recognized for pushing the boundaries of synesthetic and experiential artwork, particularly as our technological achievements and access increases.
+  +  +

The Billboard Creative (TBC) announced the debut of its first spring edition featuring artworks by three leading contemporary artists: Alex Prager, Jennifer Steinkamp, and Mona Kuhn. This exhibition is the first in a series of micro-initiatives aimed at keeping the mission of TBC activated throughout the year. These artists were selected for their unique dialogue with film and photography, two of the quintessential artistic mediums of Los Angeles. All three artists live and work in Los Angeles and play a vibrant role in the cultural community, fostering learning and supporting emerging artists. The artworks will be displayed on three prominent billboards across the city, with two billboards located in downtown Los Angeles, and another across from Paramount Studios in Hollywood. The goal of this exhibition, as with all TBC initiatives, is to broaden the reach of public art — transforming the streets of Los Angeles into an open-air museum, accessible to all.

The billboards are on view the month of April 2017.