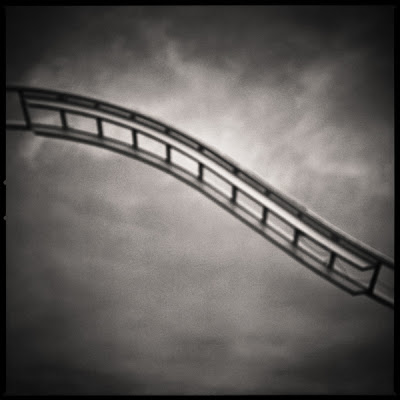 Up the Ladder Down, 2007
Photograph (c) Sean Perry /All Rights Reserved 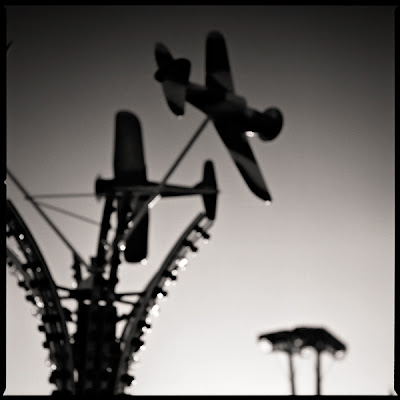 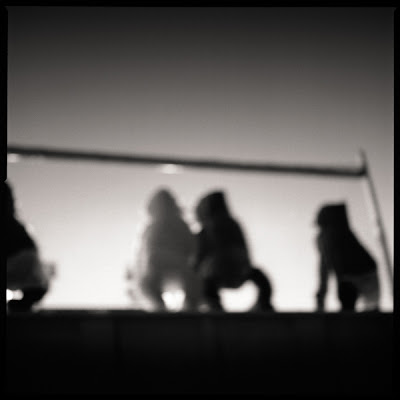 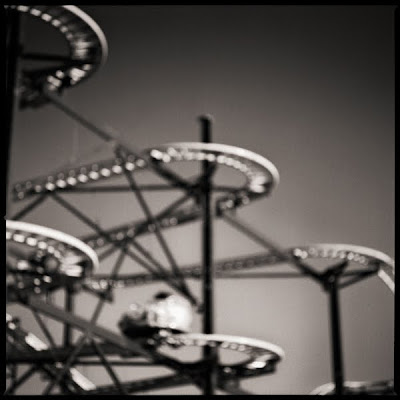 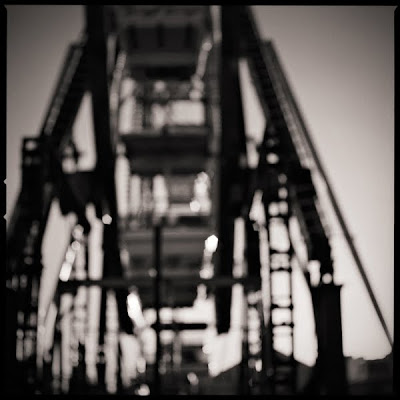 Fairgrounds is Perry’s love letter to the dreamscape of temporary environments and his large scale silver prints and limited edition catalog from the series will be on display. The hand-sewn catalog, designed by Jace Graf and published by Cloverleaf Press, includes 20 images gorgeously printed in tri-tone with a foreword by curator Clint Willour who writes “... the images linger in the mind; remain in the memory. There is haunting magic here.”

A conversation between Sean Perry and Gregory Wakabayashi follows:

GW: Can you describe the experience of creating the Fairgrounds images as a snapshot of your own creative process?

SP: For the Fairgrounds series, I was initially drawn to the architecture and mechanics of the machines— the idea that this is their reality, not ours. I would watch rides for hours, mark the sun travel and where things would be silhouetted and at what times. The majority of these pictures were at dusk, right when the air begins to feel cooler. I made images over multiple years at parking lot fairs, carnivals, the rodeo in Austin, Texas. After the film is exposed and developed, I make work prints and just live with the images a while. Printing them is the second chance I have at communicating the ambiance that drew me in the first time. I like photographing things, but I love printing them.

GW: In your previous work, Transitory, you photographed a variety of architectural structures: buildings, electrical towers, smoke stacks...all inanimate. But your photographs somehow brought them to life. They suggested a sense of movement within the stillness of pure existence. In Fairgrounds you turned your attention towards a subject that is all about movement—the rides, the people. Did that require you to change the way you looked at things in order to create these particular images and yet remain consistent with the aesthetic you established in your earlier work?

SP: No, I don’t think so.... I believe my subjects are often the subplot to the larger theme of light and its transformative qualities. I love the way light has the power to give and reduce mass and emotionally envelop and awaken misplaced things you already knew. The subjects I photograph are the characters that illustrate that phenomenon and story.

I believe these photographs are what happens when you close your eyes and listen...images about the sounds you see. I wanted to express the world of the machines, if you will. I showed the Fairgrounds pictures to photographer Robb Kendrick while I was working on them and he commented that it’s as if these are pictures of how the rides would wish to see themselves. I can’t do any better than that.

GW: Despite the apparent spareness and simplicity in your work, one of the things I see in it is a sense of meticulous consideration. As the viewer it makes me feel as if there is more to see than might be immediately apparent and that your own careful attention to the creation of the image inspires me to look at it with the same amount of care. Is that a fair assessment of how you approach your work?

SP: Thank you, that is the best possible ideal. What I really hope for in my audience is the willingness to feel something...to be amused, to dream, to be still. My intention being: Can I show you something that will let you forget everything you know and in that moment discover a small secret?

I feel that if I honor my part in making them, I can hope for a mutual exchange with the viewer in considering them. I have always felt the pictures belong to the viewer, the experience of making them belongs to me. Within that experience is my pursuit to make images about things that are earnest and graceful— to communicate the atmosphere of a thing beyond its physical form. To do that, I reduce everything I can and hopefully what is left for the viewer is something potent, iconic and dream-worthy.

GW: Who or what are some of the most important artistic influences on your work as a photographer?

SP: So many influences! My father was a biology teacher and carpenter, and much of my childhood imagery is rooted in science, a workshop and the desire to be a craftsman. The way Caravaggio felt light, how Albert Watson uses black and shadow detail, the tonality of Irving Penn’s prints. I was dumbfounded when I discovered Robert and Shana ParkeHarrison.

Beyond the imagery my heroes have created, I am deeply influenced and inspired by the way they live, the discipline practiced in their craft, the potential found in the simple, raw materials they choose to work with. I adore how the final artifact they make seems as natural as breathing, as if it existed all along.

GW: Do your photographs reveal anything about you as a person? Do they hide something? Or are they perhaps a place of repose, separate from your everyday life?

SP: I suppose they reveal everything...for better or worse, I just don’t have an off switch or filter—I don’t hold anything back, whatever I am is here. I’m restless. I never learned to separate myself from what I do. I’m full of yearning and the images I make don't escape my obsession between feelings of wonder and wish.

GW: I recall Miles Davis was once asked why he didn’t continue to play more ballads later in his career, to which he replied, “Because I know I am good at them.” The message being that he wanted to challenge himself. Your work from Transitory to Fairgrounds exhibits a very consistent visual aesthetic and you are clearly good at it. Do you see continuing that path for some time or are there are other visual directions you are thinking of exploring?

SP: I like to play with color and magazines have been the perfect venue for that. Jody Quon and Leana Alagia at New York magazine have given me great assignments.

I trust my love affair with light and atmosphere will always transcend my conscious decisions, regard- less of the directions I pursue. The continuing challenge for me is how to best serve the story and series I’m engaged in—to render an earnest aesthetic. Beyond Fairgrounds I am working on two New York themes, Gotham and an architectural theme that I’ve given the working title of Monolith. Are they a departure or continuation? The trick is to make them in a sense autonomous, beyond my influence.

SP: It’s a beautiful name, isn’t it? She was the chimpanzee scientist in Planet of the Apes. The titles in Fairgrounds are clues to where my childhood imagination began—the place where I discovered dreams. I think of nostalgia as wistful for what is past. This series isn’t about relics of what was lost, rather metaphors of what is still here, what I carry with me, what I don’t want to forget.

Really quite wonderful, these pictures. Thanks for posting them along with the text.

Great interview. I love this "I believe these photographs are what happens when you close your eyes and listen...images about the sounds you see." The thought reminds me of the American painter Arthur Dove,i.e."Fog Horns" and other works.

his words have the same atmosphere as his works .

i like artists that speak the same way as they produce .

coherence is a label of warranty .

Amazing photos and an interesting interview. Thanks!
Kathy

Right now i`m having a long and lovely conversation with Sean`s photos! :)
Great space, i just can breath art here. I`ll be back!