THE DECLARATION OF INDEPENDENCE: Happy 4th of July! 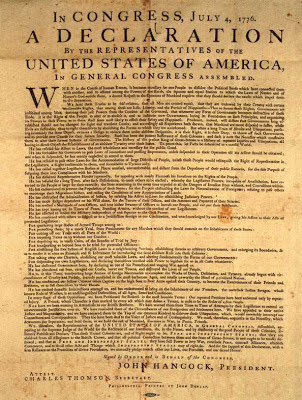 July 4th, 1776!
The 56 signers of The Declaration of Independence listed here 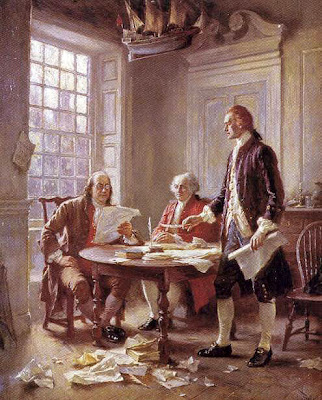 Writing the Declaration of Independence, 1776, by Jean Leon Gerome Ferris. Benjamin Franklin, John Adams and Thomas Jefferson were named to a committee to prepare a declaration of independence. Jefferson (standing) did the actual writing because he was known as a good writer. Congress deleted Jefferson's most extravagant rhetoric and accusations.

The Declaration of Independence (read it here)

"We hold these truths to be self-evident, that all men are created equal, that they are endowed by their Creator with certain unalienable Rights, that among these are Life, Liberty and the pursuit of Happiness."
Posted by elizabeth avedon

I consider this an example for all the world. So beautiful .
I am impressed that today i am not seeing more blogs and sites talking about this .
We see everybody posting about halloween , thanks giving and other hollidays , but a so fantastic masterpiece as this american people gets quiet about .
Thank you for all this links . It is beautiful.

Its great to get down to basics. The Declaration of Independence is one of those.

Happy Independence day to everyone. This is a nice image of the great document, Elizabeth.

Love this. Ciao's comment is well taken because WE (Americans) take so much for granted.