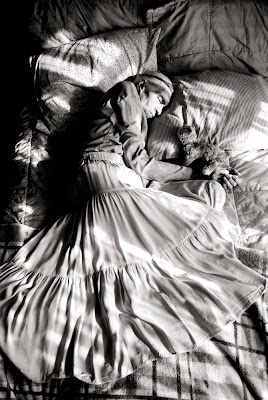 Madje Steber sleeps in her bed with her stuffed kitty at Midtown Manor her home in Hollywood, FL. in 2008.  Dementia and the medications she takes to fight memory loss, causes Madje to sleep most of the day and night. 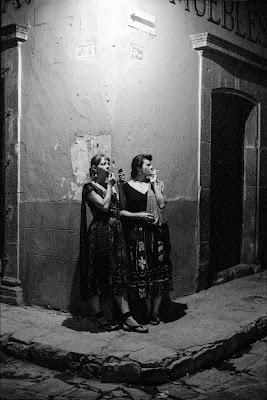 
Maggie Steber and Carlos Rene Perez collaborate in a combined exhibit, Presence and Absence. The personal nature of both presentations acts as a common bond and theme and deals with issues of isolation. A secondary bond is that until the mid-nineties the two photographers had lived together for over two decades and their continuing friendship creates a system of support and influence.

Maggie Steber’s exhibit, Rite of Passage, is an intimate recording of her mother’s voyage through the melancholy of dementia.  An only child of an only parent, Steber oversaw her mother’s care for nine years.  She used photography as a therapeutic tool to survive this longest goodbye. The fact that Steber never intended to share the work publicly makes the intimacy far more pronounced. Steber has worked in 63 countries as a freelance magazine photographer. While working as Director of Photography of The Miami Herald, the paper’s photo staff won a Pulitzer and were twice finalists for this coveted award. Her extensive work in Haiti in the 1980s and 1990s was published in an Aperture monograph entitled Dancing on Fire. Steber’s work is included in many private and museum collections as well as the Library of Congress.  She has been a recipient of grants from the Alicia Patterson Foundation, the Ernst Haas Foundation and the Knight Foundation.

In a remarkable contrast, the diversity of Carlos Rene Perez’s work exemplifies the role of the photographer as artist.  During almost 20 years of Leica Gallery’s existence, Perez has been a regular contributor to its calendar. With this exhibition, An Artist’s Life, he shows a remarkable multiplicity of style, vision and technical control, all along maintaining a truly personal perspective. His work spans 45 years beginning with traditional street photography but then veering off to fanciful tabletop toy adventures, and on to gilded masterworks inspired by Renaissance illuminations. In recent years he's been influenced by Edward Hopper's paintings focusing on the solitary experiences and encounters of individuals in intimate and introspective moments. Perez has consistently exhibited his fine art photography in New York and Texas and is in many private collections across the United States.  Commercially he's worked with Associated Press, USA Today and US News & World Report; Pratt Institute and Columbia University; New York Presbyterian and New York University Medical Centers; Bloomberg News; and 20 years covering New York fashion shows. (courtesy of the Leica Gallery, NY)