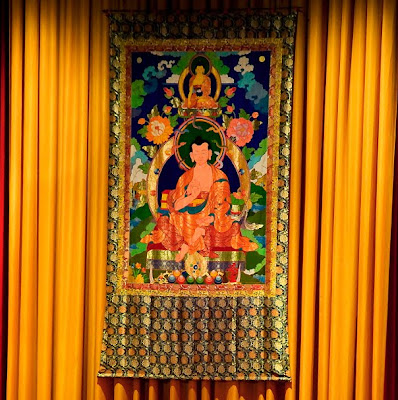 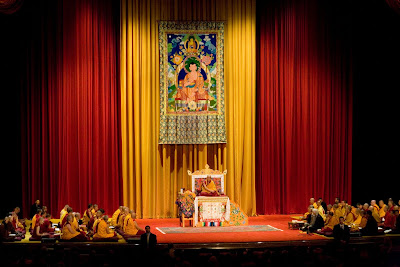 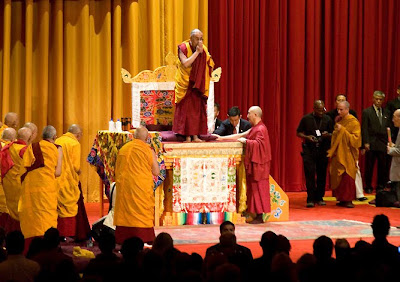 THE TIBET CENTER is the oldest Tibetan Buddhist Center in NYC. It's not a Gallery, but you are welcome to come and look around Thursday evening. On display is the 18 foot tall (rolled to 12 foot to mind the ceilings) Nagarjuna Applique Thangka that was commissioned for HH The Dalai Lama. Other Tibetan paintings of the Buddha, White and Green Tara's, among other traditional pieces, are also on display.

The Tibet Center has moved out of Dumbo since I first posted this piece and is now located at the University Settlement/Houston Street Center, 273 Bowery x Houston St, New York City.

THE 18 foot tall NAGARJUNA Applique Thangka was commissioned for The Dalai Lama's three days of Teachings on The Diamond Cutter Sutra by the Buddha and Seventy Verses on Emptiness by Nagarjuna. To begin, a request was made to the Master Tibetan Applique Artist, Dorjee Wangdue, in Dharamsala, India.

T. G. Dorjee Wangdue was born in Lhasa, Tibet in 1962. At the age of 16, he joined Namgyal Tantric Monastery of H.H. the 14th Dalai Lama. It was his teacher, Ven. Thupten Jamyang (late), a Kalachakra ceremony and ritual master assisting H.H. the 14th Dalai Lama, who encouraged him to learn and improve his natural talent in making religious images of applique. He later opened the Tibetan Applique Arts Training Centre in Dharamsala, where over 150 young Tibetans have learned this unique Art so far.

After The Tibet Center's request was placed, Master Dorjee Wangdue had a Thangka Painter from HH's own Namgyal Monastery make a pencil sketch of the Buddhist images for the huge piece. HH The Dalai Lama made adjustments to the sketch asking that the figure of the Buddha be placed above the central figure of Nagarjuna. The Applique Artist then designed the placement of all of the individual pieces and gave this to a team of crafts men and women who worked on it for many months. It was hung above HH The Dalai Lama in Radio City Music Hall, NYC, in 2007 and now resides in DUMBO.
The Tibet Center Website / Herman Velez Photography Website
+ + +

Exquisite Thankas and photos of them! We just saw an amazing film on creating fabric Thankas called "Creating Buddhas: The Making and Meaning of Fabric Thangkas" directed by Kardora Gabrielle Leindenfrost.

It's about an American woman who learned the art in India and to see the process gives you a deep appreciation for what you see when you stand in front of one. Thanks for stopping by my blog!

Here's a piece of the video mentioned above:
http://www.youtube.com/watch?v=BlAk10Y72qw

Hi Liz,
Great post! I was wondering if I could have permission to link it to our class blog which is http://tibetanartstudio.wordpress.com/
I think that my classmates would find it really interesting and inspiring... also, If I could post the pic of HH The Dalai Lama sitting underneath the Thangka applique so they could have a visual. I see that it's copyrighted and didn't want to violate that.
thanks for your comments on my blog - they mean the world to me!
namaste,
Jennifer

Thanks for posting this, Elizabeth!

Dorjee Wangdu was my teacher, and I'm so grateful for the enormous gift he gave me, passing on this precious tradition. I'm honored to preserve this work and to grow it in my own way. And to have been the only non-Tibetan among those 150 apprentices you mentioned.

Thanks also to ZenDotStudio for mentioning the documentary, "Creating Buddhas." Isadora Gabrielle Leidenfrost did an exquisite job of presenting the process and significance of fabric thangkas. I invite everyone to enjoy the trailer at http://silkthangka.com/film or http://creatingbuddhas.com

All the best,
Leslie