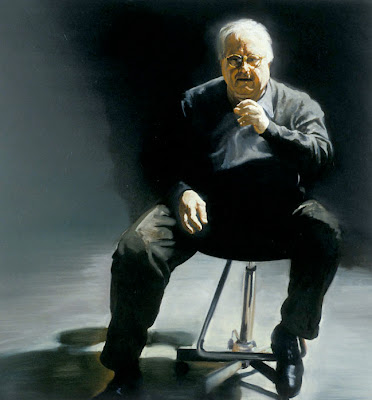 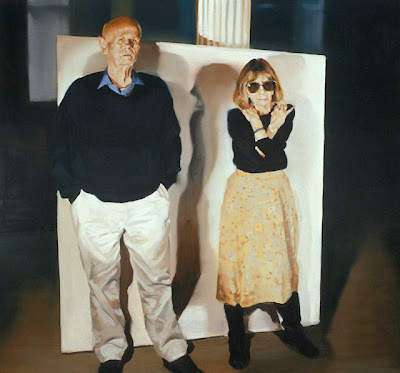 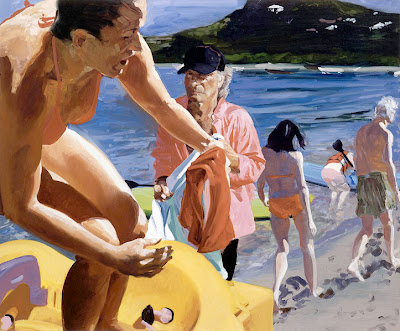 ERIC FISCHL, born in New York City, grew up in the suburbs of Long Island and Phoenix, Arizona. He received a BFA from the California Institute for the Arts in 1972. His work has been the subject of numerous important exhibitions including: the Institute of Contemporary Art, Boston; the Whitney Museum of American Art, New York; the Walker Art Center, Minneapolis; the Milwaukee Art Museum, Milwaukee; and the Museum of Contemparary Art, Chicago. Fischl lives and works in New York City and Sag Harbor with artist April Gornik. Read his full bio here 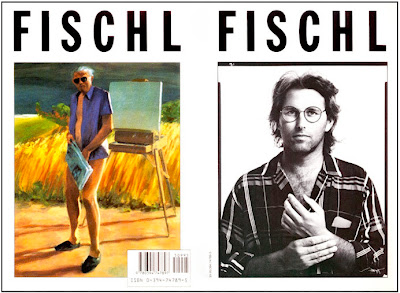 An Interview With Eric Fischl by Donald Kuspit
Front Cover right: Photograph by Richard Avedon. Back Cover left: Painting "Portrait of the Artist As An Old Man" by Eric Fischl
The following is an excert from An Interview With Eric Fischl by Donald Kuspit, Elizabeth Avedon Editions / Vintage Contemporary Artists / Random House (Buy a vintage copy here):
DK: I see you want to live dangerously: you've critically introduced your contemporaries. Let's pursue your gambit. Within the context of the understanding you've set up, who are the artists you find interesting? Why do they make a difference to us?

EF: In the mid-seventies, when sincerity and/or meaning became important again, after pop art and minimalism and conceptual art, some artists found it either in direct expression of meaningfulness, or they found meaningfulness in the direct expression of meaninglessness, and that's how the lines were drawn. When I came to New York in the late seventies, the greatest risk was sincerity. The German artists–Keifer, Baselitz, Polke, Lupertz, Immendorff, Penck–became noteworthy because they were working with a historical event that was guaranteed to be meaningful. It was the worst thing that had happened, they were the descendants of its perpetrators, and they were trying to figure out who they were in relation to it. The whole struggle for meaning since the 1970's has been a struggle for identity. It's pervasive, but most of us can't identify what happened except in personal terms. By what happened, I mean what went wrong, what gave us this sense of collapse or disappointment. The Germans were hurt not just personally but culturally as well. It's very hard for us in America to complain or to feel that our complaint is justified, because, after all, what are we complaining about? That objects we surround ourselves with are disappointing? I mean, it's a joke, we're more embarrassed about having believed in the superficial qualities of America, and it's hard to see yourself in that light. But because the Germans were so devastated culturally, you can identify with their struggle for renewal. Baselitz made a formal decision to turn his images upside down. Before that he had been making traditional realist pictures, often genre and figure scenes. So he decided to turn history upside down. He distanced himself from history, almost as a kind of penitence, a kind of self-ostracism.
+ + +
Fischl's latest paintings are of the Corrida Goyesca held each September in the Andalusian town of Ronda. The toreros, or bullfighters, dress in 18th century attire as in the era of the Spanish painter Goya, who designed their distinctive costume. The bull fight has captivated artists from Goya to Hemingway and Picasso.

today you are really inspired .
great works and text !!

It tell me Elizabeth whichever emotions hide behind an image?

Thanks for this post. I love stopping by... You made my day.
Catherine