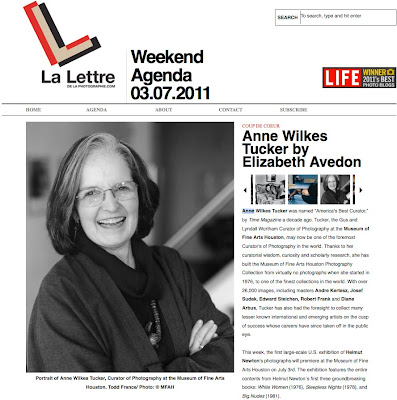 Portrait of Anne Tucker. Todd France/ Photo: © MFAH
La Lettre de la Photographie: Interview With Anne Wilkes Tucker
Anne Wilkes Tucker by Elizabeth Avedon
Coup de Coeur La Lettre de la Photographie
+ + +
Anne Wilkes Tucker was named “America’s Best Curator,” by Time Magazine a decade ago. Tucker, the Gus and Lyndall Wortham Curator of Photography at the Museum of Fine Arts Houston, may now be one of the foremost Curator’s of Photography in the world. Thanks to her curatorial wisdom, curiosity and scholarly research, she has built the Museum of Fine Arts Houston Photography Collection from virtually no photographs when she started in 1976, to one of the finest collections in the world. With over 26,000 images, including masters Andre Kertesz, Josef Sudek, Edward Steichen, Robert Frank and Diane Arbus, Tucker has also had the foresight to collect many lesser known international and emerging artists on the cusp of success whose careers have since taken off in the public eye.

Elizabeth Avedon: How did the Helmut Newton show originate?

Anne Wilkes Tucker: The Museum has a very close working relationship with Manfred Heiting. We purchased his Collection of photographs in 2002 and have continued to work with him since then. Heiting and Helmut Newton were close friends. In discussion with Helmut’s wife, June Newton, June came up with the idea of showing all the photographs in Newton’s first three books, which were really the beginning of his fame in the photo world. He had certainly been a fashion photographer before that, but White Women, Sleepless Nights and Big Nudes really cemented his influence and status, so that’s what we are showing. Manfred had organized a big show of Newton’s work in Berlin before that traveled all over Europe, but Newton had never really had a large show of his work in the U.S. ICP had had a smaller show, but this will be the first major exhibition of his work. Of the two hundred and six photographs in this show, some of them are very large at 6.5’ x 4.75’ feet. It will be a very full exhibition.

EA: What Newton images stand out for you in this exhibition?

Anne Wilkes Tucker: One of the things I thought was interesting that I enjoyed learning when I did the research for my essay in the show, was how Newton, not always, but frequently took the setting and models from a fashion shoot, and then after he’d done the work for the magazine, either disrobed the model or altered the dress, like slit it all the way up to the hip or something, how the boundary between those two lines kept shifting for him. Less in Big Nudes, as Big Nudes was a specific project that he did not for the fashion magazines, but something he conceived and carried out. But for Sleepless Nights and White Women they would sometimes start as fashion and he would take photographs for himself out of the same material, and how he redirected one in one direction, and one in the other, but knowing it’s market. (read more) 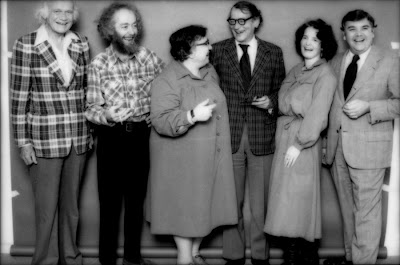 EA: What was your professional history before the Museum of Fine Arts Houston?

Anne Wilkes Tucker: I majored in art history in college. I got interested in photography, so I was the photographer for the yearbook and the newspaper in college, and then got a second undergraduate degree as a photographer at the Rochester Institute of Technology. I didn’t think I was a very good photographer when I got around other photographers, so I moved across town where Nathan Lyons was beginning what became the Visual Studies Workshop in Rochester. I got an MFA in photo history studying with Nathan and Beaumont Newhall at the George Eastman House (Newhall founded the Photography Department at the Museum of Modern Art, New York in 1935; and was Curator and Director of the International Museum of Photography at George Eastman House, Rochester), and then I had an internship at the Modern (MoMA, the Museum of Modern Art) working with John Szarkowski and Peter Bunnell, so I was really lucky. And in the summers I was in graduate school, I worked in the Gernsheim Collection at the University of Texas. So in a very short period of time, I had access to the Collections at the Eastman House, at the Museum of Modern Art, and at the Gernsheim Collection. I really had an extraordinary exposure to the history of photography in those three Collections.

EA: In creating the Museum of Fine Arts Houston Photography Collection, were you influenced by your work with Newhall, who built the early MoMA Photography Collection?
Anne Wilkes Tucker: You just can’t separate the influence of Beaumont, Nathan and John. I learned such different approaches from all three. Beaumont was the historian. There’s so much more written about photography now than there was then. Back then it was a matter of spending hours and hours and hours going through original documents just to track down people. I learned from Beaumont how to do that and to organize it coherently and think about it and place it in context.
John, who was certainly one of the great writers, was not a researcher, he was not an historian the way Beaumont was, but John was such a disciplined thinker and he had such clear ideas about what was and what was not a photographer, or good photography.

Nathan was much more willing to look at a broad range of expressions in photography and embrace them. The kinds of shows that Nathan did were much more varied and much more universal than the kind of photographers that John embraced, so in a way working for the three of them so early forced me to find my own path. (read more) 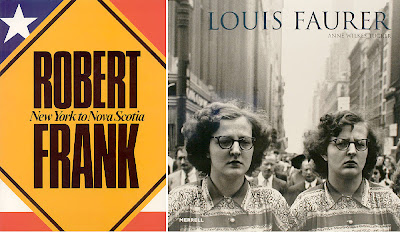 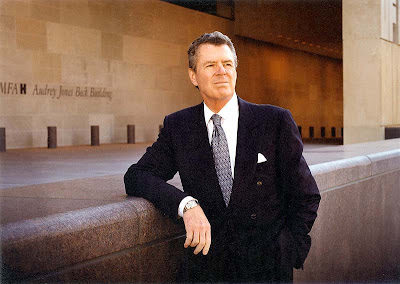 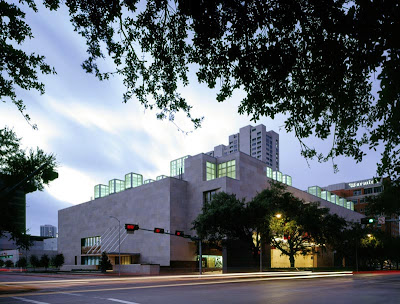 Anne Wilkes Tucker: Two things I would add. If I’m going to talk about mentors, and I’ve mentioned John and Nathan, I really have to mention Peter Marzio, who was my Director from 1982 to last Fall 2010 when he died suddenly.

When he came in 1982, the endowment was one million dollars, and when he died, the endowment was one billion. And that doesn’t include building two new buildings, finishing the Cullen Sculpture Garden (designed by Isamu Noguchi), all the art we bought, or all the exhibitions that we did. So if I’m going to mention mentors, I’m going to mention Peter, because he was major. He understood the importance of Photography to the 20th century. He was just so supportive, there is no way I could have done research on Brassai for four years and research on Japanese Photography for five years without the generous support of the Museum. I got the credit, but he’s the one who stood behind us all and made it possible. He understood and he got it.

I had plenty of invitations to leave the Museum, but I always told Peter, “You stay, I’ll stay,” because he was such an extraordinary man and visionary Director, incredibly supportive of his staff and of all of us in terms of staying with us. Some of these projects had really up and down rides, not all of them came easily, and Peter stayed with us. If we were in it for the haul, then he was in it for the haul. He was such a brilliant man that he was really great to go to when you were struggling conceptually with something, to bounce ideas off of him.

The other was Director here, William Agee. Bill was the one who hired me. The delightful part is he was so supportive of photography. He grew up next door to Barbara Morgan (American photographer and co-founder of Aperture Magazine) and had seen photographs on the wall, and knew people who regarded themselves as artists who were photographers, from his early age. Before he came here, Bill was at the Pasadena Museum of Art where he also acquired photography.

great article , this is all so interesting ! thanks for sharing !

Elizabeth - Thanks!! Another tour de force, fun to read, interview! Personal yet with so much depth and information.

I have her wonderful Louis Faurer and Brassai books. Also "Women See Women" and, thanks to your interview, I found her humorous image in it:-)

She is the rock star reviewer of Fotofest. I had the good fortune to see her there in 2010 and she was passionate, enthusiastic, perceptive.

I loved this, hearing the extra insights into Helmut Newton and gaining an understanding of how challenging and fun the role of a Curator is. Great Curators expand our thinking :-)

I loved hearing about the little extras on Helmut Newton, and generally, I loved reading this as it gives a great insight into how challenging a curator's role is.

I found your interview with Anne Wilkes Tucker fascinating. The MFAH is a long time customer of ours and it was interesting learning more about the photography department and the impact Tucker has had. I wrote a blog post on the Helmut Newton show and included a link to your article. Thank you for continuing to share information on the photography world.

Karen, I wish you would provide a link to your Blog Post on the Helmut Newton Exhibition at MFAH.

I should have done so in the original post. I thought about it after i submitted it. The link is http://metroframe.com/blog/