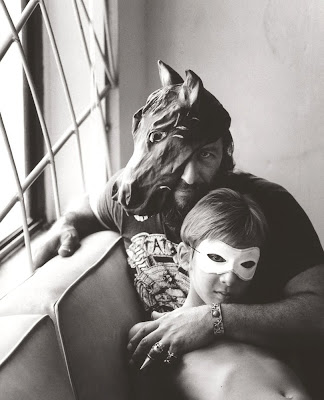 La Lettre de la Photographie Editor-in-Chief Jean-Jacques Naudet wrote, "Today is dedicated to Joel-Peter Witkin. To the amazing exhibition opening at the Bibliothèque Nationale in Paris, the two books of his work published for the exhibition and to the recent works on display at the Gallery Baudoin Lebon. Four articles were written by Bernard Perrine, and with these a fantastic Interview of Joel by Elizabeth Avedon."

"A flamboyant creator, incredible story-teller and irresistible liar (his awakening to photography during a car accident that decapitated a little girl whose head fell into his arms probably didn't exist, but never mind)' a hallucinating culture, Joel, who lives in an Albuquerque ghetto (on a farm no less) has for 30 years been exploring the relationship between sacred and profane."

Naudet refers to the story Witkin wrote in his monograph, The Bone House (Twin Palms Publishers), “It begins with my first conscious recollection, I was six years old. It happened on a Sunday, my mother was escorting my brother and myself down the stairs of the tenement where we lived. We were going to church. Walking through the hallway to the entrance of the building, we heard an incredible crash mixed with screams and cries for help. The accident involved three cars, all with families in them. Somehow in the confusion, I was no longer holding my mother’s hand. I could see something rolling from one of the over-turned cars. It stopped at the curb where I stood. It was the head of a little girl. I reached down to touch the face, to ask it, but before I did, someone carried me away. It could have defeated me, and I would have become insensible. Instead I chose to accept the injury and go on; because my will is stronger than death, stronger than the lostness of these times. This, my first conscious visual experience, left it’s mark.” 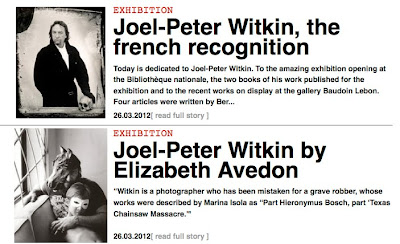 “Witkin is a photographer who has been mistaken for a grave robber, whose works were described by Marina Isola as “Part Hieronymus Bosch, part ‘Texas Chainsaw Massacre.’" – Cindra Wilson, Salon.com
+ + +
JPW: “I’m a really happy person, but I think most people think I’m some sort of a monster. I’m intensely poetic, intensely sincere. I want to make a contribution to life and the quality of life, because I want to diminish evil and raise the possibility of goodness. I think that’s what every artist wants to do whether they’re totally conscious of that or not.”
+ + +
JPW: I make ‘History Photographs’ much like the 18th and 19th century painters would make ‘History Paintings’ (Wiki: a genre in painting defined by subject matter rather than an artistic style, depicting a moment in a narrative story, rather than a static subject such as a portrait), but in my case I just did one photograph in Bogotá that’s about the history of the cross as a tri-pod and a history of photography all in one. I like that kind of stretch. It’s called Poet and Muse. The Muse, I found identical twins, women in their forties, who are just spitting images of each other. In Albuquerque, before I left for Bogotá, I drew this bridge that connects them at the hip, so they are Siamese identical twins in the drawing and in the photograph. They are talking to the Poet, who turns out to be a man who is the Laurence Olivier of Bogotánian actors. The guy is terrific. He looks like an ancient Christ figure. He has arthritis. He was perfect, perfect. I put a wreath on his head that was a kind of Christmas wreath I got in Albuquerque at a flea market where I shop all the time; and I made this kind of prosthesis for his arm in Bogotá."
view image portfolio

JPW: This was my fourth trip to Bogotá...I’ve gone there three times to photograph, but it’s gotten more and more dangerous, so that last time I was there I was robbed. I went out in the morning to buy underwear for a subject of my work of Jesus.EA: You were robbed on the way to buying underwear for Jesus?JPW: Yes! (great laughter) I was very despondent...I travel a great deal, so this doesn’t represent an event that occurs often; luckily I’ve never been harmed. But this time I’m in a nice area, but a block away is “fermenting and evil,” let’s say.
+ + +

JPW: I saw Mr. Steichen come in. He took the slides. I saw him shuffling around looking at them on the light box and then he came out and he said, “Whose work is this?” I said, “It’s mine.” He said, “I thought you are a messenger.” I said, “Well maybe I am a kind of messenger, but it’s my work.” He chose an image that was an abstraction I shot in Boston. He said, “I’m having a show and it’s called Masterpieces of Photography from the Museum Collection. He always had these grandiose names. He then had my photograph printed. I went with my brother to the opening. It was a terrific event.

EA: And you were still just 16 years old? JPW: Yes. I was sixteen and a half.

This was such a great interview, and the images, I have not gotten them out of my head since I saw them. Wow was my initial reaction, and it still is as the photographs are just so powerful.