"Nadav Kander’s photographs, Yangtze – The Long River at Flowers Gallery, New York, capture an authentic un-staged snapshot of people's lives in a region undergoing the most significant and broad sweeping changes to their physical environment in 5,000 years of their recorded history." –William Avedon
+  +  +
William Avedon: I’ve lived in China the past 12 years and was struck by the sensitivity and depth of understanding of Chinese culture portrayed in your photographs there. What led you to photograph China and the Yangtze River?

Nadav Kander: I wanted to work in China not because I wanted to be a documentary photographer within that landscape, but rather because I found it a troubled land; the reading I had done, the news casts that I saw, it seemed to be a country ill at ease. I think that always attracts me because I can take the kind of pictures that bring up emotions in the viewer that go to the collective consciousness of mankind; reminding us that we are vulnerable, that we have dark sides that we like to shy away from, but I think my photographs make you turn back to that and realize that through vulnerability we connect. So I don’t really see myself as a documentary photographer although I do realize that any series one takes in the world, provided they’re not obviously Photoshopped, become a document. I certainly don’t mind that fact but it was never my intention. I don’t go out to document what it’s like to be in China or how much water goes down the river.

+  +  +
William Avedon: Your photo in which the local police or government officials are showing on a large ruler where the level of the floodwater is going to reach is particularly interesting and beautiful [above, Three Gorges Dam IV (Flood Level), Yichang, Hubei Province, 2007]. How did you get those subjects posed in that photo? How did you meet them? How did that shot come about?

Nadav Kander: Oh, I like that one. Well I would just snoop around. That was the trip I went around the Dam wall, and I would just ask people to drive and just intuitively see a road and say, ‘Would you try to go up there?’ And they would go up there and I would get out. Some days you’re in a car and you kick some stones around and it just doesn’t seem to be working. You might look through your viewfinder and, I don’t know, it’s just not there. And ten miles on you might get out of the car and everything seems to work, the atmosphere is just perfect, and you make really good pictures. I can’t explain it better than that.

But with those guys, I think they might have been wandering around there measuring for more building. At that time, 2007, the Dam wall had been finished being built but the surrounding area was just becoming a concrete jungle all the time. So I think that’s what they were doing, they were sort of measuring where the water will be because it still has 70 meters to rise.

+  + +
Nadav Kander: ...there was one area, the Old Fengdu, where that picture of that man is sitting with his back to me in blue underpants [above, Old Fengdu II (Looking at New Fengdu), Chongqing Municipality, 2006], reminiscent to me of a Caspar Friedrich painting. Where I went to the old Fengdu and saw how most of the town, certainly at a lower level, had been flattened already. As the water was creeping up, they were leveling more and more of the buildings rather than just vacating them and letting the water come around. They had to level everything because they were worried that ships might snag their hulls on buildings so they would bulldoze everything. It was a kind of cruel end to any village or any town that was in the Yangtze’s way,in the rising of the Yangtze. So that was one place, that’s called ‘The City of Ghosts’ because of folklore and ancestry they have. They feel that dead people inhabit that city. That was pretty much covered and they built opposite on the opposite bank, which is what that man sitting in his blue underpants is looking at, the new Fengdu, which was to house about 7 million and when we went there, it was pretty empty.

+  +  +
William Avedon: Tell me about the choice of using the quote by the ancient Chinese poet Du Fu in your book? I thought that was a very beautiful choice. How did that come about?

Nadav Kander: I did quite a lot of reading for deeper understanding of the passages of time that have passed China by. He came up a lot and I love that, ‘The State Is Shattered, Mountains and Rivers Remain.’ It’s really powerful. I think what tips its hat for me is how whatever happens to yourself, to humans, there’s always a path onwards. Whatever the world can throw at you, whatever sadness you have, however difficult your life becomes, you can choose to go through this in a way that makes you grow. So it makes a lot of sense for me – it’s almost Buddhist. (read the entire Interview here) 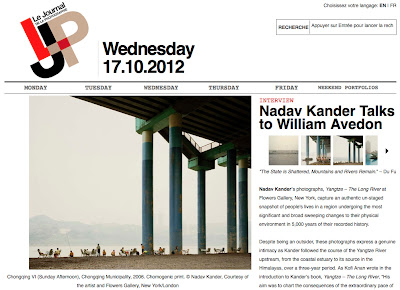