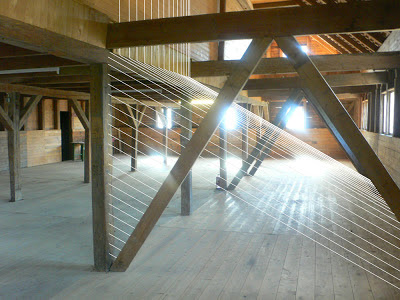 "I will incorporate the architecture of the mill to create
a hybrid of silence and sound." 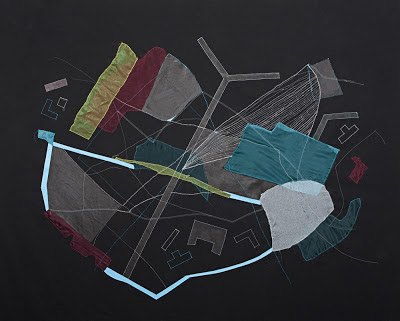 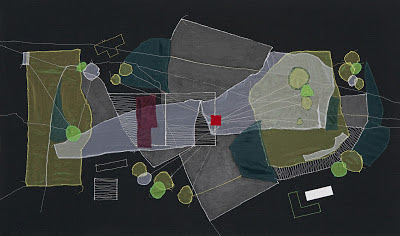 Christine Gedeon was born in Aleppo, Syria and lives between NYC and Berlin. She examines the spaces we live in and how it affects us as individuals, using thread mainly as a medium, as both installation and works on canvas. Her installation work resides on the merging of the architectural space and the work itself.

"STITCHED WORKS: As humans, we define ourselves partly in relation to the built environment around us. Buildings in the urban context interact with one another and allow individuals to create a narrative of who they are-past, present, and future. Our memory and identity are forever changed after buildings and monuments are destroyed through war, natural destruction, and urban planning. The subsequent rebuilding both "as it once was" as well as a complete modern reconstruction ultimately suppresses memory seemingly creating a sense of utopia."

"My most recent stitched works are inspired by the evolution of urban landscapes and how it ties to memory, focusing recently on New York City's topographical evolution. I use Google Earth and archival images to collect my data and use this information as a starting point to create this invented series of urban renewal projects. The works are still done through improvisation pointing to a heterotopic, neither here nor there vision of New York; an unreality based on a utopian inspired ideal." 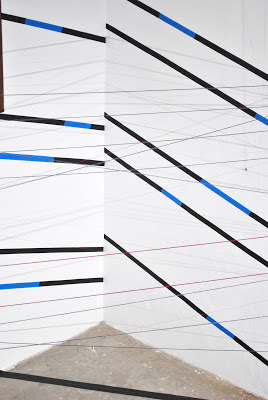 
Valparaíso Studio Installation: I created an aerial view drafting of my studio space including the wooden beams on the ceiling and loosely translated the drawing as a 3D installation, reflecting the interior space. One rule in creating the piece was to make it low-impact, thereby not creating any holes in the walls and working with the existing elements that were left there. It's through these processes, exploring aerial view drawings using thread as a medium that I'm interested in reinventing space as both 2D and 3D works.