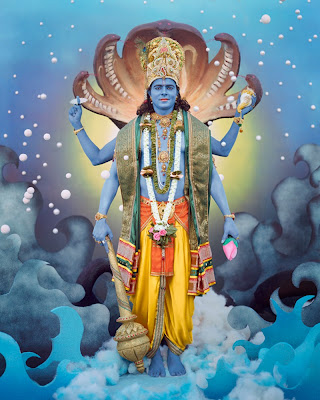 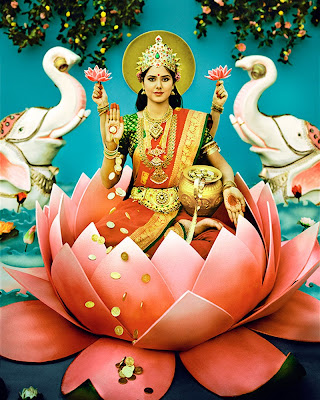 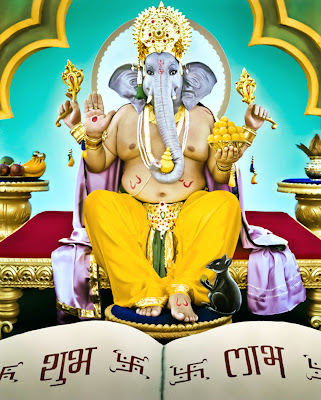 “Darshan” is a Sanskrit word meaning “vision” or “view,” and is most commonly used in the context of Hindu worship. It can also be translated as an “apparition” or a “glimpse.” One may seek and receive the Darshan of a deity, and upon sight, that Darshan may invoke an immediate connection between that deity and the devotee. A Darshan can ultimately be described as an experience purposed on helping one focus and call out to his or her sense of spirituality.

“Darshan” is a series that aims to photographically recreate various classical images of Gods and Goddesses pivotal to mythological stories in Hinduism. Printed on a massive scale, these photographs are presented at ClampArt in an elaborate installation that closely mimics the experience of a Hindu temple, complete with incense, lamps, and invocations.

Historically, Hindu deities have been depicted endlessly through painting and sculpture. However, portraying these Gods and Goddesses photographically is what makes Sharma’s project so unique. To make imagery for the series, exhaustive research on each character leads to the assemblage of a team of approximately thirty-five Indian craftsmen who create props, sets, prosthetics, make-up, costumes, and jewelry to the artist’s exacting specifications. These shoots rival the production standards of a motion picture film in both complexity and budget. The final photographs are not the product of extensive digital manipulation through Photoshop, but rather are primarily straight images  planned in-camera made with extreme patience, perseverance, and an elaborate vision.

Manjari Sharma (b. 1979) is a photographer born and raised in Mumbai, India, now based in Brooklyn, New York. She has a BA in Visual Communication from S.N.D.T. University, Mumbai, and a BFA in Still Photography from Columbia College of Art and Design in Columbus, Ohio. Her images have appeared in such publications as “Forbes India Magazine,” “Vogue India,” and “Geo Magazine,” and online at NPR, “The New York Times,” The Huffington Post, “PDN,” and “Life Magazine.” Sharma received an honorable mention for the prestigious Santa Fe Prize in 2012, and she was invited as a “Shots and Works” artist for LOOK 3: Festival of the Photograph in 2013. (text courtesy of ClampArt)

This exhibition is generously supported by LTI/Lightside Photographic Services. More about The Darshan Project