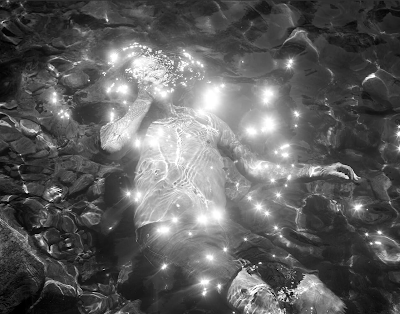 Untitled, 2017, from the project Becoming a Specter
Photograph © Daniel Coburn

"Some photographs faithfully record the world in front of them. Others bend the objects presented to the camera through the mind’s lens, transforming them beyond surface appearances. This latter approach reveals the surrealism already present within the real, confronting us directly with the ambiguities we too often deny."

"Daniel Coburn’s Becoming a Specter traffics in these paradoxes, teasing out the tension below the surfaces of our most intimate conceptions of ourselves and others. Although Coburn’s photographs are domestic, they are never banal. The artist does not buy into the tepid reality of mortgages, traditional families, and material largess. Instead, Becoming a Specter speaks to us in the language of our deeper desires—and fears. It is playful, and yet eerily foreboding. Like water, its meaning is mutable, slipping through our fingers just as we begin to grasp it."

"Water, it seems, takes pride of place in Coburn’s photographs. The artist and his kin submerge themselves in the blinding light of the sea, haloed by the reflective stars of its surface. There are biblical precedents, to be sure, in baptism. But water has its own mercurial symbolism, by turns suggesting troublesome times and undifferentiated chaos as much as it does eternal salvation. The world is birthed through water, all of the best and worst of it. Coburn’s landscapes are more than meets the eye. Like the water that features in them, they are psychological terrain, and oxymoron's the law of the land." ....read more at Elizabeth Houston Gallery

Daniel Coburn is a recipient of a 2017 John Simon Guggenheim Memorial Fellowship.  He was named as a finalist for the Arnold Newman Prize for New Directions in Photographic Portraiture the same year.