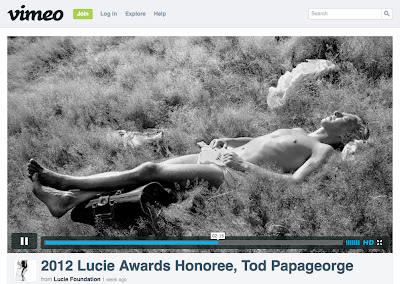 "Tod Papageorge began to photograph during his last semester at the University of New Hampshire, where he graduated in 1962 with a B.A. in English literature. After living for about a year apiece in Boston, San Francisco, and Europe, he moved to New York in late 1965 and was quickly accepted into a small circle of photographers engaged in transforming  the documentary “style” of the medium into a poetic form driven more by subjective perception than journalistic literalism. During the 1970s, he received two Guggenheim Fellowships in photography and a pair of National Endowment for the Arts Fellowship-Grants. In 1979, following one-year appointments at MIT and then Harvard, he was named the Walker Evans Professor of Photography at the Yale School of Art, and, as the Director of Graduate Study in the photography area from then until 2011, shaped the Yale course into an M. F. A. program that, among other achievements, would produce thirty-five Guggenheim Fellows.

Papageorge is the author of Public Relations: The Photographs of Garry Winogrand and Walker Evans and Robert Frank: An Essay on Influence, prepared in conjunction with exhibitions that he guest-curated for New York’s Museum of Modern Art in 1977 and the Yale University Art Gallery in 1981. In 2011, Aperture published Core Curriculum, a collection of his writings on photography.

Tod Papageorge’s photographic work has been widely exhibited nationally and in Europe, and is represented in over thirty major public collections, including those of the Museums of Modern Art in New York  and San Francisco as well as the Art Institute of Chicago. It has also been collected and published in three monographs: Passing through Eden: Photographs of Central Park (Steidl, 2007), American Sports, 1970, or How We Spent the War in Vietnam (Aperture, 2008), and Opera Citta (punctum, 2010). In 2008, Papageorge was shortlisted for the Deutsche Börse Photography Prize and, in the following year, invited to the American Academy in Rome as a Resident in the Visual Arts. In 2010, he was awarded the Rome Commission in Photography."–The Lucie Foundation
Posted by elizabeth avedon

What stunning images, each and every one of them hold your attention and stay in your mind even when you are not looking at the image. That's quite a thing to achieve.

What stunning images, each and every one of them hold your attention and stay in your mind even when you are not looking at the image. That's quite a thing to achieve.