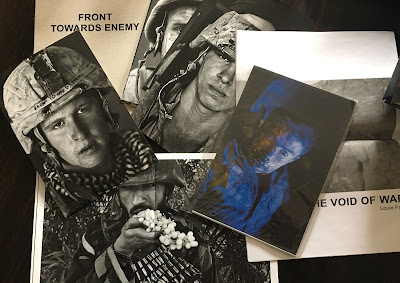 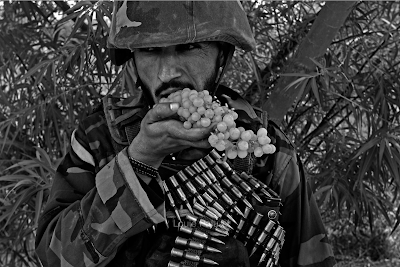 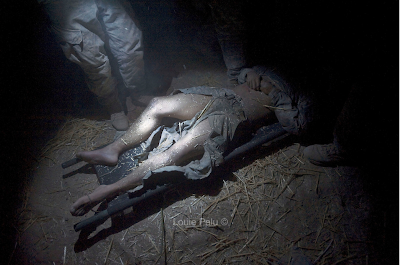 Front Towards Enemy
A US soldier illuminates the legs of a comrade critically injured by an improvised explosive device attack at night on their armored vehicle for the flight medic flying with the 101st Airborne Combat Aviation Brigade who is organizing the evacuation of the wounded via a MEDEVAC helicopter to Kandahar Airfield, Kandahar, Afghanistan. © Louie Palu/ZUMA Press/New America Foundation 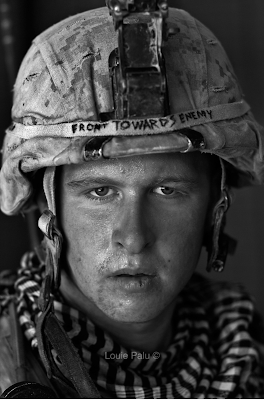 Front Towards Enemy
U.S. Marine Lcpl. Damon "Commie" Connell age 20 who is part of Alpha Company of the 24th Marine Expeditionary Unit (MEU) Battle Landing Team (BLT) 1/6, after a patrol in Garmsir District, Helmand Province, Afghanistan at Forward Operating Base Apache North. Located in Southern Helmand Province, Garmsir has been a haven for insurgents for the last several years. Earlier this year the Marines cleared the area after a period of heavy fighting. Damon is from Las Vegas NV and this is his first tour of Afghanistan. © Louie Palu


"Front Towards Enemy is a deconstructed photobook showcasing the distinctly different ways award-winning photographer Louie Palu documented the war in Afghanistan over the course of five years. The power of Palu's images extend beyond one specific conflict to make a statement about the chaos of war and the ways media influences our perception of armed conflicts." – Yoffy Press

I usually don't like to view unbound books. They generally seem cooked up by the book designer trying to make a design statement, regardless of its effect on the photography. However, in the case of Front Towards Enemy, the mastery of documentary photographer and film maker Louie Palu's powerful images bring a cohesive message to this 'deconstucted' book – and I am appreciating each and every individual portion.

Front Towards Enemy begins with a cardboard slipcase with four components: an accordion fold image set, large almost 9x12" soldier portrait cards you can frame or display individually (I've taped mine in a row staring at me on the wall), a newsprint publication, and a staple-bound zine. The entire publication can also exist as a pop-up exhibition and comes with a diagram and instructions.
As a huge fan of Mr. Palu's work, I am in awe of this collection and highly recommend it to all! 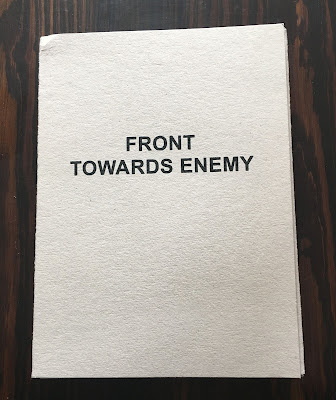 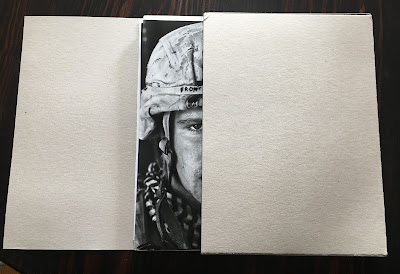 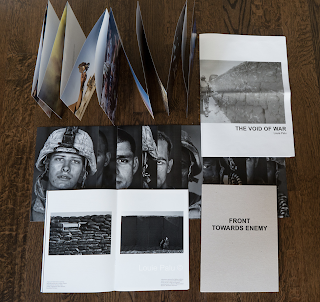 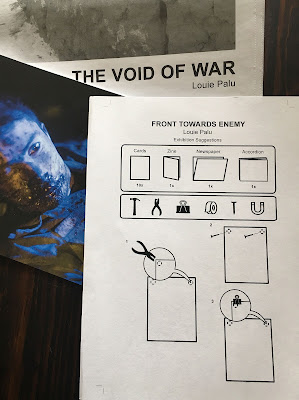 Louie Palu, is a 2016-17 John Simon Guggenheim Foundation Fellow and a Harry Ransom Center Research Fellow in the Humanities at the University of Texas at Austin.

Louie is an award winning documentary photographer and filmmaker whose work has appeared in festivals, publications, exhibitions and collections internationally. He is the recipient of numerous awards including two Pulitzer Center on Crisis Reporting Grants, 2011-12 Bernard L Schwartz Fellowship with the New America Foundation and Milton Rogovin Fellowship at the University of Arizona. He is well known for his work which examines social political issues such as human rights, conflict and poverty. Read more Here