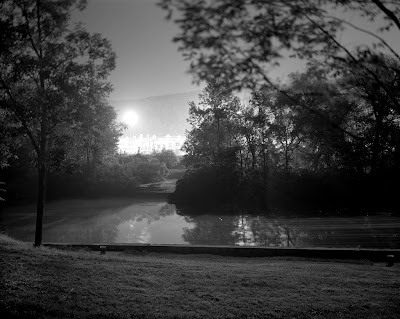 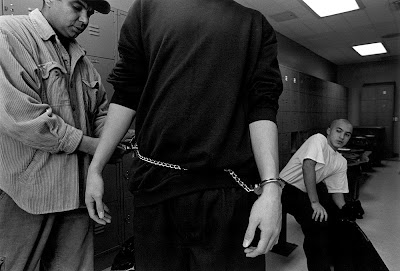 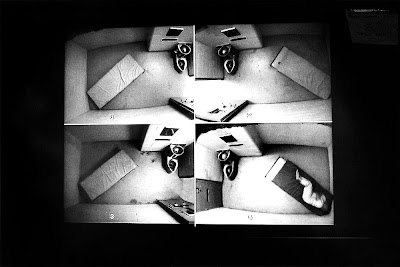 Photograph © Lizzie Sadin
Series: Mineurs en Peines. Year: 1999-2007. Title: Surveillance camera, Black Canyon School, Arizona. Video surveillance of solitary confinement cells where young inmates can be held for a week. They are placed there if they display aggressive behavior to either staff or inmates or attempt suicide. 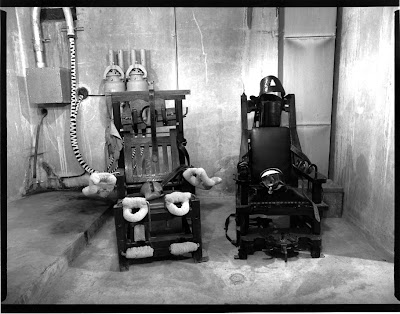 Photograph © Lloyd Degrane
Stateville in a basement storage area- Electric Chairs (no longer in use) one from the State the other from Cook County- during an electrocution a prisoner's hair would catch fire and sometimes their eyeballs would melt, so a helmet, on each chair, was placed onto their heads so that witnesses wouldn't be subjected to such visual horror –1993. 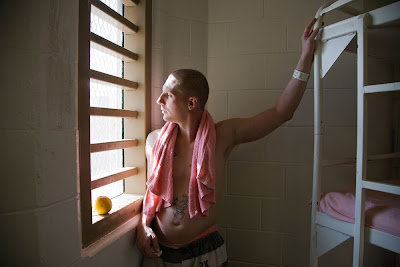 Photograph © Scott Houston
Series: Chain Gang. Year: 2003. Brian Gawlik looks out the window of his cell at Estrella Jail after performing chain gang duty. Brian was convicted for possession of a " dime bag of weed" and sentenced to four months. During lock down, inmates stay in 8x12 foot cells for 23 hours a day unless they are out on assigned chain gang duty. 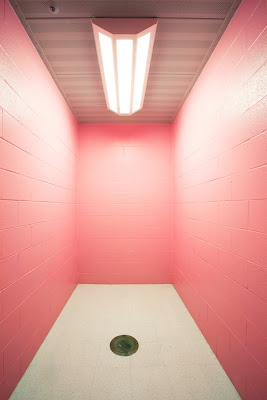 "Prisons are "home" for over 9 million people on this planet, and their numbers are likely to increase in the coming decades. As Curators, we hope this show will act as a moment to ask ourselves what our different societies should hope to achieve by (mass) incarcerating those who transgress." – Curators Pete Brook and Hester Keijser
+ + +
Cruel and Unusual is a curatorial collaboration between guest curators Pete Brook and Hester Keijser. The exhibition showcases the work of Araminta de Clermont, Amy Elkins, Alyse Emdur, Christiane Feser, Jane Lindsay, Deborah Luster, Nathalie Mohadjer, Yana Payusova, Lizzie Sadin, Lori Waselchuk, and others.

Noorderlicht Gallery is producing a 'must-have' catalog for Cruel and Unusual, designed as a newspaper by Pierre Derks in an edition of 4,000. Along with visuals from the main exhibition, the catalog contains articles, interviews, ephemera and material from photographers Pete Brook encountered during his crowd-funded road-trip through the U.S (here), capturing the chaos, interactions and visual excitement he saw in photographers’ studios, contact-sheets and home-towns while on the road.

Isn't it strange, as a species, we claim to be civilized.