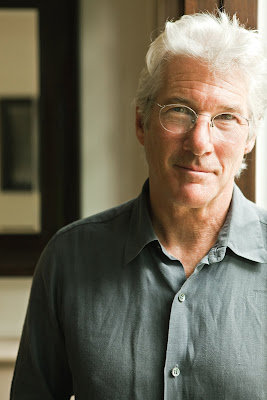 Richard Gere Receives the George Eastman AwardBy Elizabeth Avedon for Le Journal de la Photographie
“It's a great honor to receive this prestigious award. In light of past recipients and the valuable work the Eastman House has done in film preservation, photography and the captured image, I'm very grateful to have been recognized by such a distinguished group.” –Richard Gere
February 16th, Richard Gere received the the George Eastman Award for Distinguished Contribution in the Art of Film, as well as for his International Humanitarian Leadership, from George Eastman House in Rochester, NY.Gere is known as much for his leading rolls in films such as American Gigolo, An Officer and a Gentleman, Cotton Club, Pretty Woman, Primal Fear, Unfaithful, The Hunting Party, and Chicago, as for his ongoing commitment as advocate and supporter of numerous humanitarian causes through his Gere Foundation.Dr. Anthony Bannon, Director of George Eastman House, said about Gere's nomination, “We have a special interest in inviting Mr. Gere to receive this honor, as he embodies the spirit of all four of the major awards this institution bestows, including the George Eastman Award, the George Eastman Honors (which is presented to those who excel in both motion picture and photography) and the Eastman Medal of Honor (which is awarded for exemplary public service). We admire Mr. Gere’s own considerable photographic skills. I am also well aware of Mr. Gere’s work on behalf of the people of Tibet and his relationship with H.H. The Dalai Lama, and I have followed both his career and his advocacy for many years. I read with interest his recent statements before Congress, and must tell you they very much echoed a conversation I had with the late Manute Bol when he visited Eastman House to speak about the crisis in Darfur.”George Eastman House, the world’s oldest museum dedicated to the art, history and science of photography and motion pictures, was the first museum to create a school of film preservation, the L. Jeffrey Selznick School of Film Preservation. Established in 1947, their motion picture archive contains the leading silent film collection in the world. With nearly 30,000 titles, the collection includes significant holdings from Metro Goldwyn Mayer, various independent studios, personal film collections of Cecil B. DeMille and Martin Scorsese, the Merchant Ivory Archives, the Technicolor Archives, as well as lesser known documentaries, shorts, newsreels, and avant-garde works. In addition, Eastman House is home to more than 400,000 photographs representing the history of photography, making Eastman House the world’s most consequential non-government, independent collection of still and moving images.The George Eastman Award was first presented in 1955, and past recipients include Charlie Chaplin, Gary Cooper, Cecil B. DeMille, John Ford, Greta Garbo, Harold Lloyd, Louise Brooks, James Stewart, Gregory Peck, Lauren Bacall, Lillian Gish, Audrey Hepburn, Mary Pickford, Isabella Rossellini, Martin Scorsese, Meryl Streep, Gloria Swanson, Jessica Lange, and Graham Nash.
Also Read
An Interview With Richard Gere by Elizabeth Avedon