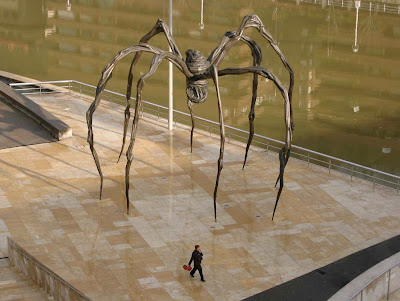 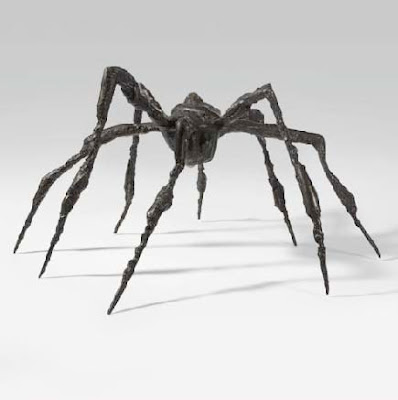 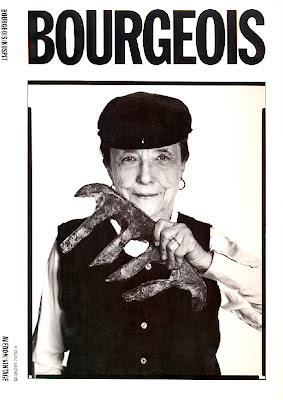 AN INTERVIEW WITH LOUISE BOURGEOISby American Art Critic, Donald Kuspit
(Elizabeth Avedon Editions | Vintage Contemporary Artists)
Cover Photograph (c) Richard Avedon
The following excerpts are from AN INTERVIEW WITH LOUISE BOURGEOIS by American Art Critic Donald Kuspit (Elizabeth Avedon Editions|Vintage Contemporary Artists, Random House):
Donald Kuspit: You have spoken of (your art) as encompassing the whole history of art, but I wonder if you have any special consciousness of modern art. What do you think about modern art in general? How do you see yourself in the history of modern art?

Louise Bourgeois: I am not interested in art history, in the academies of styles, a succession of fads. Art is not about art. Art is about life, and that sums it up. This remark is made to the whole academy of artists who have attempted to derive the art of the late eighties, to try to relate it to the study of the history of art, which has nothing to do with art. It has to do with appropriation. It has to do with the attempt to prove that you can do better than the next one, and that a famous art history teacher is better than the common artist. If you are a historian, you have to have the dignity of a historian. You don't have to prove that you are better than the artist.

But I can say this. I studied in Paris in the thirties at a time when artists had the ateliers that were open to students. My favorite teachers among many were Fernand Léger, Othon Friesz, and Paul Colin. Michèle Leiris and André Breton were also part of my education. Also, I taught for a long time and was given many honorary doctorates. Flattering as it is, it has little to do with my ongoing self-expression. Also, I valued my friendships with Corbusier, Duchamp, and Miró, Arp, Brancusi and Franz Kline and Warhol. Today I value my friendships with Robert Mapplethorp and Gary Indiana.

LB: I like Francis Bacon best, because Francis Bacon has terrific problems, and he knows that he is not going to solve them, but he knows also that he can escape from day to day and stay alive, and he does that because his work gives him a kick. And also, Bacon is not self-indulgent. Some people will say, "What do you mean by that? He always paints the same picture." That's true–he always paints the same picture, because he is driven. But he is not self-indulgent. Never.
+ + +

LB: I think I know why the Museum of Modern Art did not buy my work. The truth is very difficult to speak of. There was a certain style of collecting at the Modern which had to do with...I think I should watch my words.

DK: Why? Don't watch your words. You have lived long enough to tell the truth.

LB: Well, it had to do with the trustees, with pleasing the trustees. Alfred Barr was not a trustee; he was an employee, like all the rest. The trustees had real buying power. Alfred Barr had special skills, but he was not part of the Board of Trustees. He was on the other side. The artists who succeeded in selling at the time–Calder, Mark Rothko, Ben Shahn, they were the three–pleased the trustees. You had to entertain the Board, and these Three Stooges knew how to do that, knew how to socially entertain these important people, these trustees. I did not mind that, as a woman, but I could not do it.

Women had to work like slaves in the art world, but a lot of men got to the top through their charm. And it hurt them. To be young and pretty didn't help a woman in the art world, because the social scene, and the buying scene, was in the hands of women–women who had money. They wanted to be entertained–they were lazy and sometimes stupid, and they wanted to be entertained by men of a certain age. So these charmers were what was called in the eighteenth century a pique-assiette in French, somebody who picks at your plate, who will come entertain for dinner, like a buffoon–it is a kind of profession that interests me very much. And they are picked from among artists because there is a certain prestige to being an artist, but from a professional point of view they are more entertainers than artists. They relate to the storyteller, which was a profession. The storytellers of the Middle Ages were men who went from place to place, telling their tales, and sometimes reached the top because of their acting and verbal abilities.

Because of the profession of my husband, I lived among these people. It was interesting. And because I was French and kind of discreet, they tolerated me–with my accent I was a little strange, I was not competition–and I was cute, I guess. They took me seriously on a certain level, but they refused to help me professionally. The trustees of the Museum of Modern Art were not interested in a young woman coming from Paris. They were not flattered by her attention. They were not interested in her three children. I was definitely not socially needed then. They wanted male artists, and they wanted male artists who did not say they were married. They wanted male artists who would come alone and be their charming guests. Rothko could be charming. It was a court. And the artist buffoons came to court to entertain, to charm. Now it has changed, now the younger men are in–older women and younger men.
+ + +
DK: Why do you think the Museum of Modern Art finally gave you a retrospective exhibition?

LB: It had to do with one person, that wonderful, wonderful woman, Deborah Wye. She worked very, very hard. She convinced them, she got all the information...she convinced them that I was important.

Excellent post on one of my favorite artists. She gives such an outspoken, honest interview.

I am linking this post to g+. Well done!

What an interesting interview, and I was lucky enough to see one of her works with Anders and Dexter in Japan a few years ago when we got the chance to go there for a holiday. It was a great sculpture.

Wow, what a spider. Looks like i have to pull out my old TARANTULA DvD. :-)
Wonderfull pictures and thank you for following me.